DIESEL FILMS RELIVES THE BEST OF 2018

As the New Year gets rolling, Diesel Films took time to reflect on highlights from 2018. This year our trophy client list has included the NFL, MLB, Nike, Electronic Arts, UNINTERRUPTED and the Internet Society. We retained our first social media marketing client in one of the top baseball agencies in the world, PSI Sports.  We also moved into a brand new, spacious office space. Lots to be proud of.

We reached out to our staff and some of our most important freelancers to find out about their favorite memories of 2018. The diversity and meaning of the comments are very compelling, read below:

Jacob Gorenberg, Editor My favorite project would be the branded content series Clutch Moments we produced with JuJu Smith-Schuster and Christian McCaffrey for the NFL and Bridgestone.

Jacob on-set during our shoot with UNINTERRUPTED.

This series gave us opportunity to create two pieces with two athletes who know how to perform with pressure on their backs and everything on the line. I think the series turned out great and I was proud of the shorter promos that I cut because they had the same energy as the full-length pieces. Watch here.

Sam Burton, Camera Op & Editor I enjoyed working with the Internet Society, shooting and editing their conference recap video in Panama. Everything from the amazing Gamboa rainforest to the people that we met while we were there was amazing. We worked with local production company C11 Productions and they were not only great at what they did, but also showed us around Panama like we friends. I learned a ton from them about not only about culture, but also the history of the area we were in. 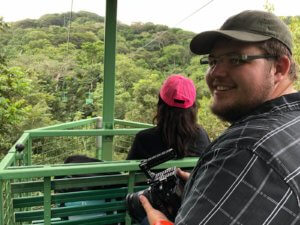 Sam taking photos above the Gamboa Rainforest in Panama.

Another project that I loved was Pairings, a series we did with UNINTERRUPTED and Patron. It was so much fun to meet and work with WNBA veteran Candace Parker as well as celebrity Chef Kay Kay. The food smelled amazing and the two really had a good chemistry with each other. I really like challenging shoots and that one was no different: 3 cameras, wireless video, and Movi’s. There were also these beautiful large windows that lined the whole back of the house. Blending and shaping that light was a challenge that Erik Butts and I had to deal with. We had a lot of help from some KinoFlo Celebs and an Aputure 300d. 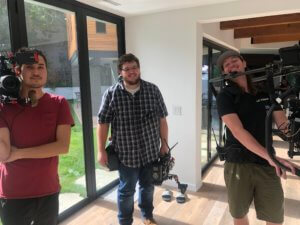 It ended up looking amazing and being one of my favorite projects of the year. Watch here.

Mike Tran, Graphic Designer My favorite project was the UNINTERRUPTED and The Hate U Give discussion. I’m always up for any project that involves photography and working on-set. 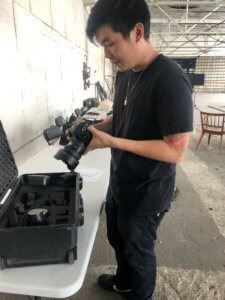 More importantly, I got the chance to see how everything was set up from the lighting to the equipment. We’ve all seen these shoots before but to see it from this perspective I got a better understanding of how the final piece came about.

Leandra Dichirico, Sound Engineer My favorite project was the Baker Mayfield documentary because Diesel Films and Bon Lavi Productions saw the importance of keeping the crew the same throughout the filming process. It truly made it feel like a second family. 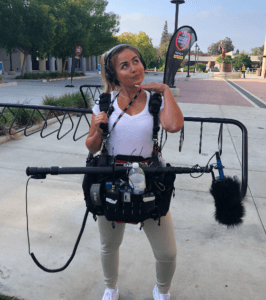 My biggest takeaway was to always be prepared and back up gear just in case something happens while we are on the road. Watch here.

Karly Finison, Marketing Coordinator While there we many highlights of 2018, my favorite project we worked on was the roundtable discussion with UNINTERRUPTED about the movie The Hate U Give. I’ve admired UNINTERRUPTED’s growth as a platform and how they’ve brought athletes’ voices to the forefront of important conversations beyond sports. From sourcing props, to working with multiple makeup artists, to craft services, this five camera shoot was undoubtedly one of our biggest of the year. This project also felt personal for a number of reasons. 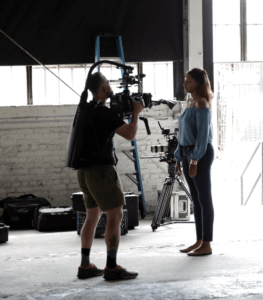 First, it featured four talented black women who I’ve admired for long time: journalist Jemele Hill and WNBA veterans Candace Parker, Chiney Ogwumike and Angel McCoughtry. All had extremely unique perspectives on The Hate U Give and themes prominent in the movie including police brutality, finding your voice, and the challenges that come with growing up black in America. Much of what they had to say was also relatable to my life.

As someone who attended a predominantly white high school and college, I enjoyed hearing how Jemele Hill, a native of Detroit, navigated Michigan State. In the discussion, she recalled meeting classmates who had never been around black people in their life. Jemele then candidly mentioned not knowing what a keg stand was when she first arrived on campus to white students’ chagrin. I think we’ve all experienced cultural moments like this, where you learn that other people don’t always have the same upbringing or shared experience as you, even your friends. Her ability to talk so openly about this was impressive. 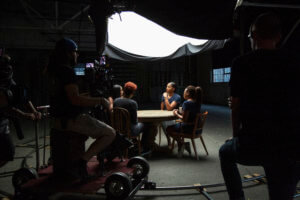 A look at the final set.

On the post-production side, we were tasked with cutting down the hour long conversation to 15-minutes. There were so many strong moments that it felt like we were putting together a puzzle as we cut down the piece.  While some clients prefer a much cleaner look, UNINTERRUPTED definitely embraces a more unfiltered, raw approach to set themselves apart. In the final piece, we included many dynamic angles so viewers see the production in the background, as if they are on-set themselves. It was awesome to execute with such a talented team at UNINTERRUPTED and be part of a powerful and necessary conversation. Watch here.

Seth Shapiro, CEO All of the above were extremely gratifying for me to be a part of.  Some of my highlights:

STAY UP TO DATE.