As social media has evolved, so has the way we as fans and consumers communicate online during big events like the NFL Draft. The Draft was a perfect example of how players, brands and sports teams created unique content to not only reach, but ultimately gain loyal fans and consumers.

Check out my 10 takeaways below:

During this year’s draft we saw an increase in players creating their own content without brands or sponsorships attached. Diesel Films was a production partner on Baker Mayfield’s docu-series Behind Baker, which follows his draft journey and has nearly six million views on Facebook Watch thus far.

Additionally, it’s safe to say Baker Mayfield shut down the internet with this creative parody of Brett Favre’s draft night photo. Lindsey Waterhouse and Patrick Hayes (Waterhouse Hayes) mentioned that they even presented this idea to brands, but no one made a move. Luckily, they still went with it! As you can see, it earned over 161,399 likes on IG, and 176,000 likes + 51,000 retweets on Twitter.

2. A PEEK BEHIND THE CURTAIN

I definitely appreciated getting to see players travel to their new teams and pick out their jersey numbers. A few even got to throw out the first pitch at local MLB games, a gesture to welcome them to the city. Before the rise of social media, these types of interactions were exclusive to the player, possibly his family and his new team. The public would never have been able to witness the NFL draft process in this more intimate way.

Behind the scenes of Darnold's first day as a pro → https://t.co/m3GRVwkXqa pic.twitter.com/cx6gxmJnJ4

The Cardinal has landed.

3. ENDORSEMENTS THAT TELL A STORY

Many brands went beyond just posting a generic photo of a player and their product. This photo below shows Baker and his mom, Gina Mayfield, embracing after he was picked first by the Cleveland Browns. It’s a brilliant caption by Baker and Bose, that displays the essence of Baker as a person, and is something that many people can identify with as well.

While the focus was on players, it was great to see teams share the moments when coaches and GMs called the team’s new additions. The Ravens captured a great moment of GM Ozzie Newsome making his final draft call before his retirement. It’s clear he was appreciated by his colleagues. Emotional!

He's the only general manager in Ravens franchise history [founded in 1996] his 22-year career is coming to an end. pic.twitter.com/746PZM9WgI

Some teams used the NFL Draft as an opportunity to launch a new creative look/theme on Instagram. I found the Patriots’ page consistent and visually appealing because their social media team used similar image templates throughout. In contrast, the Jets’ Instagram page lacked cohesion. 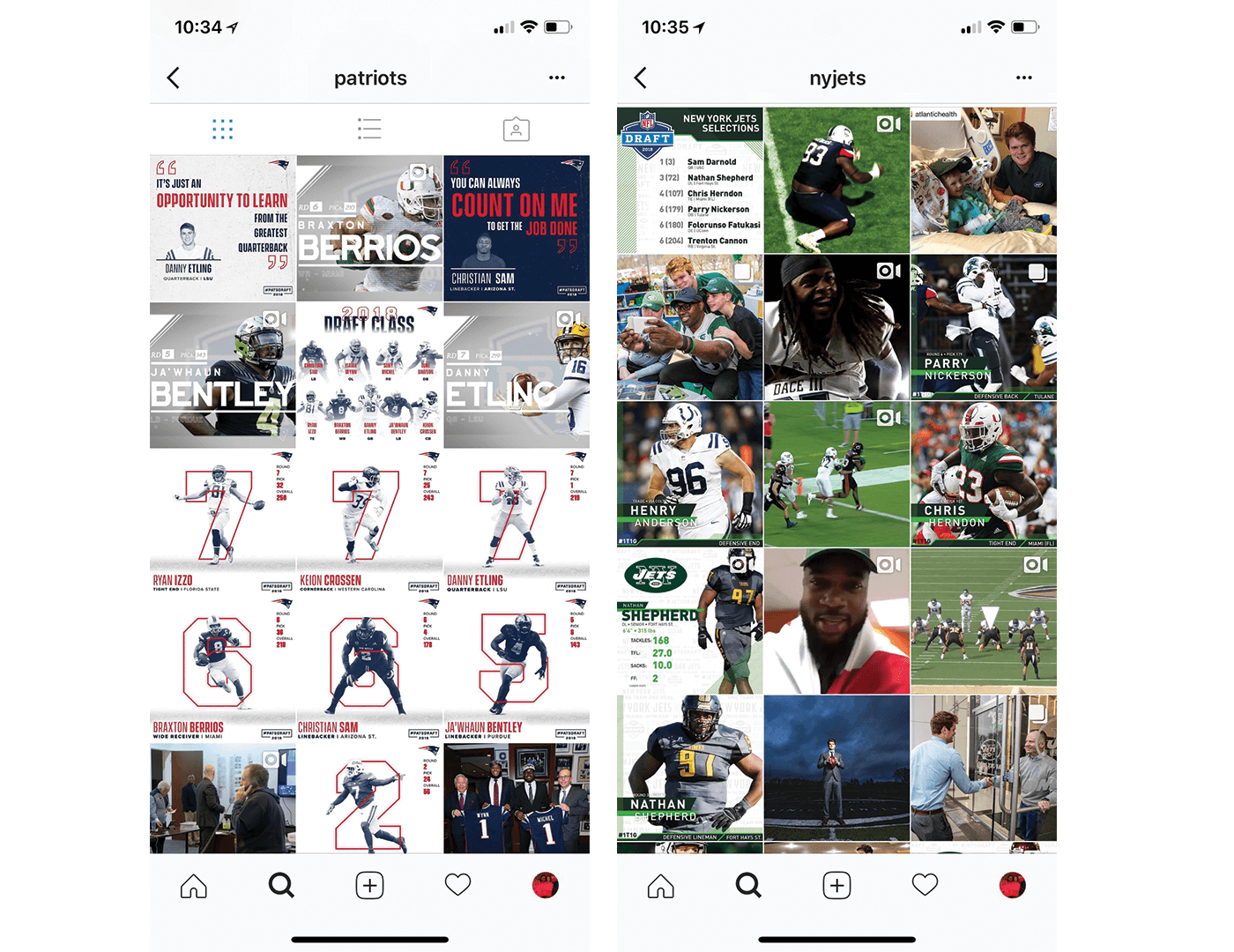 I was very impressed by platforms like The Players’ Tribune & UNINTERRUPTED. These two brands gave us VIP access to the draft and also showed off some of their new partnerships (who doesn’t love pizza made by Derwin James? 🤣).

Something special UNINTERRUPTED did was leverage the NFL Draft buzz to push their own content, outside of just coverage of the draft. There’s definitely an opportunity for other platforms to do the same.

The @bakermayfield era in Cleveland is officially here! @joethomas73 & @Hawk recap the #NFLDraft so far on a bonus episode of The #ThomaHawk Show 🔊

Nothing like starting off #NFLDraft day with a pizza. It only went up from there. @PlayersTribune #PIZZAHUTpartner pic.twitter.com/aE6htKTITZ

In the resurfacing of former Wyoming QB Josh Allen’s racist and insensitive high school tweets, it is a clear reminder to the next class of NFL prospects that what you post can follow you forever.

This is perhaps one of the aspects of the draft I was most impressed by. Colleges of draft prospects were producing great, high-quality content leading up to the draft and on draft day to congratulate their former players. Not only is this awesome for former players, but it’s also a way to soft market to prospective student-athletes as well. Many prospective student-athletes care about a team’s online presence, and if they are in the final stages of choosing between a few schools, this is definitely something they may consider. While these are just two examples, I loved how University of Georgia and USC created their own hashtags #DawgsInTheNFL and #USCtotheNFL.

Congratulations to USC QB Sam Darnold on being selected No. 3 overall by the @nyjets!#USCtotheNFL | #NFLDraft pic.twitter.com/spuDHQIN6D

One of the main social media changes from the draft last year, is the addition of Instagram stories. Brands like Nike used Instagram stories to highlight players who had recently signed with the Swoosh. I like to refer to Instagram stories as the “fun side” of Instagram because there’s less pressure to have a perfect image, but its still a great way to post something you want fans to appreciate for an extended period of time. 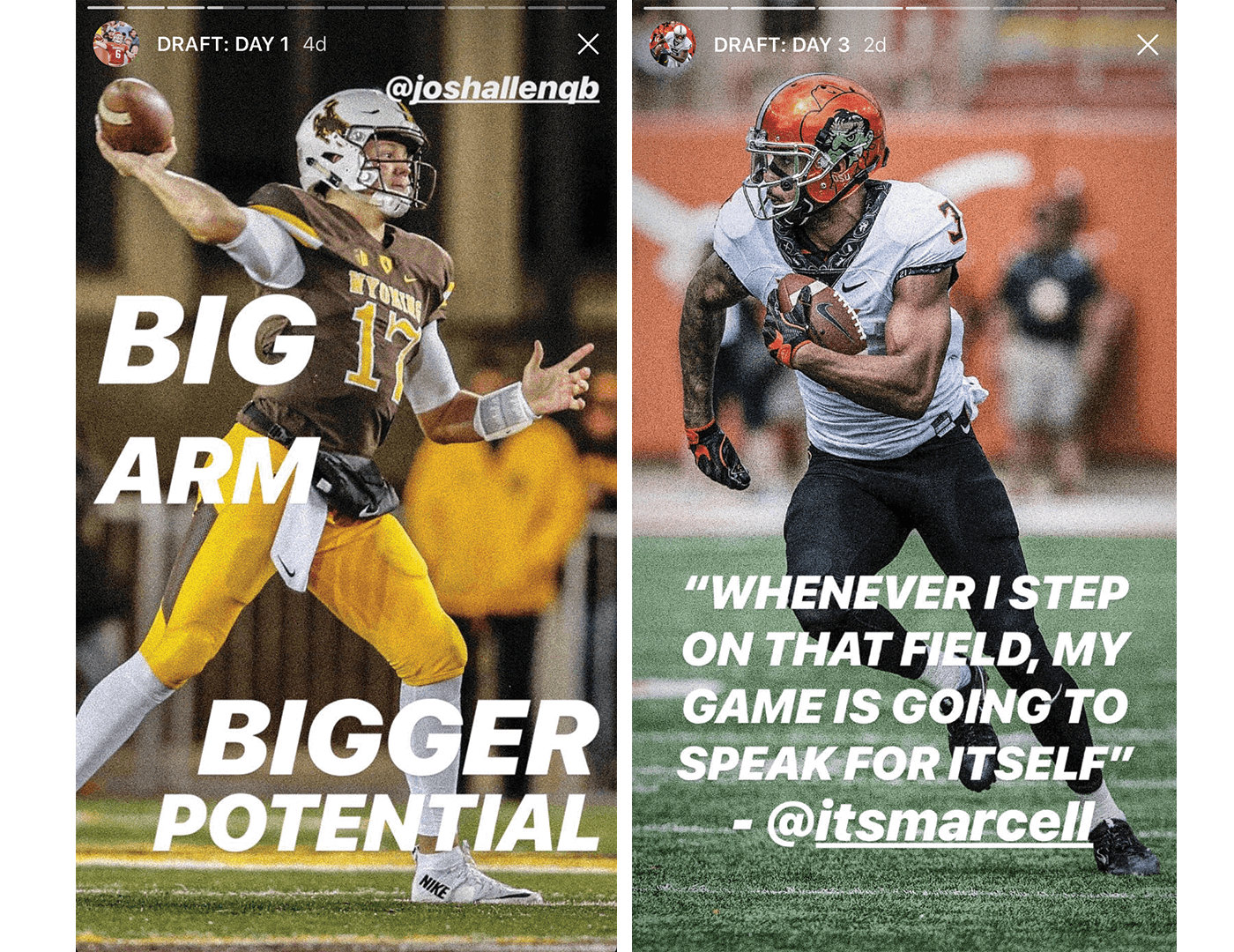 Lastly, and perhaps the best part of social media during the NFL Draft is getting to see everyone’s thoughts on the draft picks in real time. Reaction videos were the best!

I look forward to seeing the way brands, teams and players innovate and take their content to the next level this season. Hopefully, it continues to provide inspiration to the next generation of athletes and encourages a culture of greater creativity.